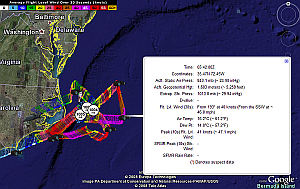 Hurricane reconnaissance is the most accurate way to get a read on the condition of a tropical storm or hurricane. Special aircraft, known as Hurricane Hunters, are equipped with weather instruments, and a brave complement of scientists and aviators, and they fly right through these huge storms to measure the winds, temperature, air pressure, etc. Weather forecasters use the data to get more accurate information on the strength and to better forecast the storms.
The folks at Tropical Atlantic, have put together Google Earth files letting you watch live hurricane recon missions, or see the results from recent missions. Right now, we have two tropical storms in the Atlantic: Tropical Storm Cristobal off Cape Hatteras, and Tropical Storm Dolly off the Yucatan peninsula. If you go to their special recon page, you can see links to their recon archive, or to the current live recon data

for Google Earth. Once you open a recon file, you will see colored wind barbs which indicate the strength of the winds for the storm at that position as the plane flew through that part of the storm. A legend in the upper left gives you an indication to the strength of the winds based on the color. The wind barbs also indicate the strength by the number and shape of the barb for each position. And, finally, you can click on a wind barb with the left mouse button and get details on the reading for each position (which also includes, temperature, pressure, altitude of the plane, etc.).
This is a really cool way to get some insight on how weather forecasters gather their data for big storms. Tropical Atlantic also has a special Google Earth file which provides you with a wide range of weather data for Atlantic weather including satellite photos, sea surface temperatures, wind and wave analysis, and much more. That’s why their collection is a part of the GEB storm tracking tools collection which gives you access to the best global storm tracking tools available for Google Earth.