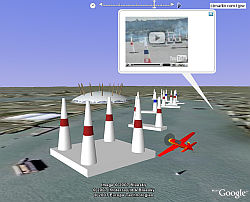 For the last three years, Google has brought together the dedicated folks who have been involved with moderating the Google Earth Community forums. Moderating the forums is a huge job as there are over 1 million registered members in the forums, and millions of anonymous readers of the posts. The moderators help make sure people post things in the right forums, do not violate the rules of the forums, and, most importantly, they help answer the many thousands of questions people ask about using Google Earth, the data, or anything at all that is related to content in Google Earth. The tradition has been set that each summer the meeting is held in a different location. Last year was Washington, DC. But, this year the meeting will be next week in London!
I’ve been invited to the meeting as well, and am looking forward to my first real visit to London (although I feel like I’ve already been there thanks to Google Earth). In fact, my wife and I are going out a few days early to see some sights. And, I was excited to find out that the Red Bull Air Race will be held this weekend, which I plan to watch on Sunday. Speaking of the air race, check out the 3D animation of Red Bull in London completely in Google Earth done by Joe Wade.
I’m also looking forward to meeting in person several long-time GEB readers while I’m in town. If you fall in that category, make sure you drop me an E-mail (or leave a comment here). Maybe we can set up a time. With a little help from Google Earth, I’m personally hoping to see a variety of sights (many written about in GEB) and visualized with Google Earth during the last three years. Google Earth Blog officially began posting on August 1st, 2005. And after over 1500 posts, I deserve a break. Time to go celebrate in London!