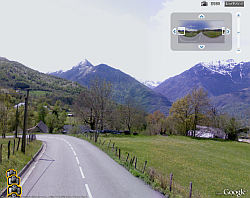 Google has just released new Street View imagery for the first time in another country other than the US. What better place than France in July? Just in time for the Tour de France. One of my early favorite KML file collections depicted the routes of the Tour de France. It’s amazing to tilt your view and see the difficult climbs and distances the racers have to endure. This year, I already pointed to a collection showing the 2008 Tour de France routes

for Google Earth by Thomas Vergouwen. Use this to find the actual routes while viewing the Street View layer. The new Street Views in France are higher quality than most of those in the US. Turn on the Street View layer in Google Earth. Zoom in close in France to find a camera icon along a route you want to look at. Click on a camera and follow the link to “Jump into Street View”. The quality of some of these photos is really good. I particularly like some of the shots in the French Alps. Double-click on the gold camera icons to fly to other images. Of course, you can also use Google Maps to view the French Street Views.
NOTE: I’m still looking for someone to release a network link so you can track the race live in Google Earth (like was done last year). In the meantime, there is a Google Maps mashup that lets you track a couple of the racers and see the Street View imagery at the same time. Check out UbiLabs live Tour de France tracker in Google Maps.
via Google Operating System