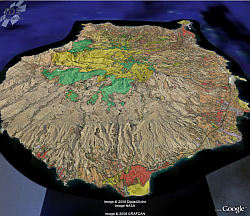 The Canary Islands Spatial Data Infrastructure (IDE in Spanish) has released Google Earth access to some of its geographic data. Right now you can get multiple zoom levels of detail for Topographic Maps 1:5.000, Streetmaps, Vegetation Map, Land Use Map and Protected Areas Map. And, they plan to add more maps in the coming months. The maps were posted at the Google Earth Community by Jorge Rosales. You can download the Canary Islands maps here

. As you zoom in, more information will be queried from their server and then drawn as an overlay in Google Earth. The default map is the topographical map. You can look under the IDECanarias folder for other maps to view. Very nice data!
I’m a big fan of seeing GIS (Geographic Information System) data like this made available to the public. Many governments have either been reluctant, or have not had the funding, to make this type of data available to the public. The data has not always been easy to convert to new formats. Recently, the top GIS software manufacturer – ESRI – has made an update to their software which makes it easier to publish GIS data in KML. Hopefully we will see a wave of useful GIS data made public in the coming months.
According to Jorge, the Canary Islands KML “…uses a server side KML to WMS translator that maps user coordinates space in standard WMS requests. Main features are: continuous user view refresh (not only on view stop), works fine with high tilt camera angles (standard GE WMS support don’t work propertly), use Canary Islands SDI cache technology for fast response, multilanguage support (Spanish/English) and legend access (via standard WMS legend support).”