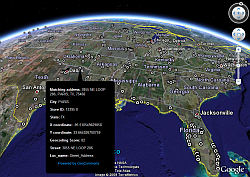 On July 1st, Starbucks announced they will close about 600 stores around the US. Since that time, many caffeine lovers in those areas have started petitions to keep their favorite location from losing its juice. And, the markets have had their reaction that this is yet another sign of a collapsing economy. But, even more interesting is that Starbucks released a list of all the locations in a PDF file. Last week, Keir Clarke at GoogleMapsMania took the PDF and scraped the locations into a spreadsheet. Then he used batch geocode and the Google spreadsheet mapper tool to quickly (30 minutes to do the whole ) create a Google Maps map of the closures. I was kind of disappointed Keir didn’t take the step to add a line of code to make his map available in the Earth API as well.
Fortunately, someone else scraped the same PDF and put the Starbucks closures into Finder!. Finder! is an excellent free browser-based service which lets you find, organize and share geospatial data in common formats. Including Google Earth’s KML format. So, here’s the Google Earth view

of the Starbucks closures.
If you zoom into the placemarks, you’ll find it’s not always easy to find the particular store based on its address. Geocoding from addresses is usually not accurate – and sometimes places you a block away (or even more).
Just for fun, you can get a quick look at the same KML file in the Google Earth API plugin. Read below the fold to see it.

Here is the Earth API with the Startbucks Closures using Takitwithme’s embedded Google Earth tool which lets you give it a KML file and it will generate an embed snippit you can stick on a web page to show the KML file in the Google Earth API plugin.