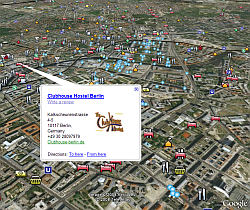 Nearly a year ago, Googler Michael Jones spoke about the techniques Google used to get detailed map information in India. We’re not just talking about streets, but also points of interest such as tourist spots, businesses, hospitals, schools, etc. If you perform a search or turn on the “Places of Interest” layer folder items, you will see a wealth of information for many countries. The secret was to develop tools to enable local people to contribute their knowledge to help create the maps. Enabling lots of local people to provide their knowledge to gather data is a technique which has become known as “crowdsourcing”. This same technique was used in the recently released data for Kenya. Now, for the first time, Google has released to the public a big part of the map creation tools which they call Google Map Maker. This is a significant milestone in accelerating the availability of more map data for the parts of the world not fully mapped.
According to the announcement they are enabling the following countries for people to contribute data using Map Maker: Cyprus, Iceland, Pakistan, Vietnam and the Caribbean nations of: Antigua & Barbuda, Bahamas, Barbados, Bermuda, British Virgin Islands, Cayman Islands, Grenada, Jamaica, Netherlands Antilles, St. Kitts & Nevis, St. Lucia, St. Vincent & the Grenadines, Trinidad & Tobago. Hopefully even more locations will be added in the coming months since there are still quite a few countries to go. But, this is a great start!
Google had already made available some tools to allow businesses to add more accurate and current data to business listings in Google Maps/Earth. Google Blogoscoped just today released a nice post telling you how to add or modify your business listing at Google. And, Google also enabled anyone to move markers for search results in Google Maps to place the markers more accurately (so, if the placemark returned for your house or favorite business is wrong – you can fix it yourself).
By the way, Google Earth is the best way to view the vast amount of local information Google has amassed. Open up the Places of Interest layer folder and look at the long list of available information (dining, lodging, transportation, etc.). This is the hidden treasure of information Google has made available to the masses. I really wish Google would improve the interface for layers so more people could discover this very useful information. (Read about Google Earth Layers).
See also discussion about the new Map Maker at Google Operating System, and Google Maps Mania.