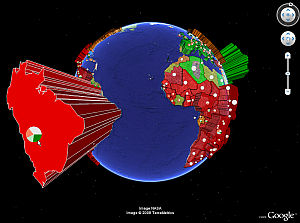 An excellent set of 3D visualizations has been added to the Google Earth Outreach Showcase. The visualizations show the state of forests around the world by country. The world has lost close to half of its forests already today, and the continued high pace of deforestation contributes greatly to climate change and the loss of biodiversity. When you first load the Disappearing Forests KML

, you will see deforestation rate by area. Red indicates a decline in forests, and the scale indicates the number of hectares changed in the last year. Each country has a placemark which provides very interesting details on the state of the forests. You can also choose from a list of other forest maps in the Places pane under the folder called “Country deforestation data”.
The KML was developed by David Tryse who also was involved with the Edge of Existence collections highlighted earlier this year in an Outreach Case Study. David used data from the World Resources Institute (WRI): The Last Frontier Forests: Ecosystems and Economies on the Edge (1997), Greenpeace: The Worlds Last Intact Forest Landscapes (2006), and United Nations Food and Agriculture Organization: Global Forest Resources Assessment (2005). David used the following tools: PHP(+Ming for flash counter) & MySQL: XAMPP, World Borders Dataset (+chartAPI-icon idea): thematicmapping.
This deforestation visualization is really an excellent example of putting Google Earth KML to work. The graph type used is called a prism map and has been used in many KML files (see list below). Recently a tool Thematic Mapping Engine has been developed by Bjorn Sandvik to make it easy to create your own prism maps for Google Earth (as well as other map types like choropleths and proportional symbols).
Here are some other examples of prism maps done for Google Earth: