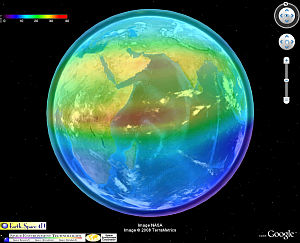 Last week, NASA announced the release of an amazing dynamic Google Earth resource which shows time animated condition of the Earth’s Ionosphere. The ionosphere is used to bounce radio signals over the horizon for long distance communication. But, when storms occur on the sun’s surface they can mess up parts of the ionosphere and disrupt ionosphere-based communications. The new NASA Google Earth data can be used to quickly understand where and when there may be radio communication issues.
See for example

. You use the time slider to see the animation, but note that it will take a while to load each image overlay which covers the entire Earth. Red means area of strong atmospheric disturbance where communications problems are likely to occur. Blue/dark means communications will be fine. You will notice that the night side of the Earth is the best time for radio communications.
This NASA information not only makes for cool looking Google Earth visualizations, but is very useful to anyone with a profession or need for using short-wave radio (e.g. HAM radio operators, mariners, coast guards, etc.). Airliners are increasingly flying over the arctic regions to take shorter routes, but in this area they can’t use satellite communications based on geosynchronous satellites. So, they resort to short wave radio over the poles. If the ionosphere is important to you, check out the full list of GE ionosphere visualizations from NASA here. NASA also has a communications alert and prediction system which uses this data.
NASA has done many other Google Earth visualizations. Here are just a few: