[UPDATED May 9th: Google and other organizations have released many Myanmar visualizations for Google Earth including storm tracks, flooding data, and before/after satellite imagery. This post is being updated with the latest.] 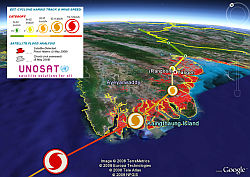 Over the weekend, Tropical Cyclone Nargis struck Myanmar as a category 4 storm with winds greater than 115 knots. The storms caused terrible flooding as well, and thousands of lives were lost. The UN Institute for Training and Research Operational Satellite Applications Programme (UNOSAT) regularly creates maps to track disaster situations and has released a visualization for Google Earth

showing the track and strength of the storm and the extent of flooding which resulted. via Google LatLong Blog.
Also, here are a couple of NASA satellite photos of the storm before it struck and as it was over Myanmar

. via GEarthHacks and NASA.
Google provided a new KML

showing an animation of Cyclone Nargis from the Naval Research Laboratory’s satellite imagery. You have to wait for each set of images to load (it takes a minute or two) before the animation plays smoothly. Also, adjust the animation speed for smoother playback (click on the clock icon on the left of the time slider). Google also linked to an NRL KML

which shows more details during the timeline of the hurricane. via Google LatLong Blog.
HurricaneMapping.com sent me a Nargis KML

which shows the track of the storm along with wind swaths, and details at various stages of the path.
Google has posted a new KML file

which shows a variety of before and after Cyclone Nargis imagery of Myanmar. The imagery comes from a variety of sources including NASA, DigitalGlobe, and GeoEye/CRISP Singapore. You can clearly see the tremendous flooding which has caused the worst of the damage and fatalities from this storm.
As an aid to workers in Myanmar, Direct Relief International has released this KML file

showing all of the Myanmar Ministry of Health facilities (over 700 sites) using data from the WHO 2002 Global Health Atlas survey. They used the spreadsheet mapper tool to make the collection.