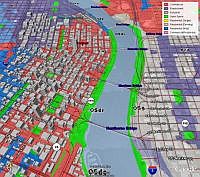 When Google first came out, there was one GIS outfit who enthusiastically embraced KML as a way to share their GIS data with their community – the City of Portland, Oregon. This was in 2005 and they created some fantastic KML files showing things like commercial districts, tax properties, etc. I’ve long been expecting many other GIS shops to do the same, but apparently few have had the resources to develop the necessary software to convert their data visualizations over to KML. There are reasonably priced tools like Arc2Earth and KMLer which make it much easier to take data from ESRI GIS tools and output them as nice KML.
Last week, Google announced they had worked with ESRI to convince them to more fully embrace KML (which is now an OGC standard) so it would be easier for GIS shops to output to KML. Jack Dangermond, CEO of ESRI, actually joined Google on the stage and announced the next release of ArcGIS Server (version 9.3) will have much more support for KML.
Shortly after the big ESRI announcement, I heard from the GIS department for the State of Maine about some of their efforts with KML. They have a web page with many KML files sharing selected data with the public (warning: some of the files are quite large and may slow down GE). I’m sure they will be anxious to try out the new ESRI tools to share even more of their data, but take advantage of optimization features of KML such as regioning and view-based network links.
Jack Dangermond said there is currently some resistance in some pockets of the GIS world to sharing data. He has spoken to some GIS departments who don’t want to share their data. Hopefully, the public will increasingly see the utility of professional sources to GIS data, and begin demanding more access to the data. Google Earth, through KML, enables powerful visualizations with an easy to use interface. But, we need more GIS organizations like the City of Portland and the State of Maine to embrace it.