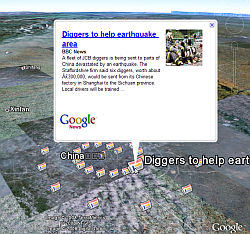 As promised last week during Where 2.0, there is now a new layer in Google Earth found under the Gallery layer folder called Google News. The layer shows placemarks for articles found in Google News georeferenced to location. Turn the layer on, and as you zoom into a region you’ll see placemarks begin to appear – more as you get closer to a story. Each placemarks includes the headline for a story,and when you open the placemark you get the news source (e.g. Associated Press), an excerpt of the article, and a link to the original story. You’ll also see links for similar related headlines from other news sources. The example shown in the screenshot is a search for “Sichuan” with the Google News layer turned on.
What’s really interesting here is that Google is using new advanced search techniques to determine whether a story applies to that specific location. For example, I don’t see any Paris, France stories appearing over Paris, Texas (or vice versa). And, according to talks I heard today from Google’s Factory Tour of Search, they’ve also been working hard on the same technology extended to many languages. I would be interested to hear from people viewing Google Earth in other languages whether the new Google News layer works for them (leave a comment to this story).
Since there can be many news stories on any given day tied to a specific location, you will either see a spiral of placemarks for each story, a summary of news items on the same topic in a placemark, or if there’s just a few placemarks they will “explode” from a single visible placemark into multiple ones when you click on the placemark.
Google will also be making this new layer available under the new “More…” button in Google Maps which was just introduced last week with Panoramio photos and Wikipedia stories. Now, what I’m wondering is that if those three will be combined in Google Maps that way, why didn’t they include the new Google News layer under the Geographic Web layer for Google Earth? Maybe they want to experiment with it more with a larger audience before they combine it.
[UPDATE May 20: Here is the Google announcement. No mention in their announcement about it being limited to the English version, but several people have said they don’t see it in other language settings of Google Earth.]