During the last week, Google has slowly rolled out several new layers for Google Earth. One notable thing about this is that they have changed the way they introduce layers to Google Earth. It used to be they would roll out several new layers all at once during a bi-monthly layer update process. Now, Google seems to have changed the process so they can add new layers on a daily basis if needed. This makes it possible to spread out the news on important new layers and keep new content coming to Google Earth on a regular basis.
When a new layer is added, if you re-load Google Earth, the new layers are automatically turned on. Either through the Preview layer under the Geographic Web layer folder, and/or directly in the layer folder the new layer belongs. Also, they have re-organized some of the layers during these deployments. The Terrain layer is now at the bottom of the list, and some of the other layers changed position slightly. Now, I just wish Google would improve the interface for the layers in Google Earth. A new version of GE with the ability to search layers is needed. 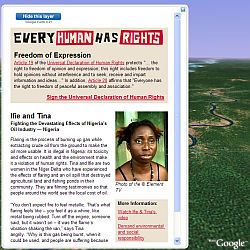 In addition to the other layers already mentioned, Google also rolled out a new layer for the “Every Human Has Rights” campaign. This layer is designed to highlight human rights and is another Google Earth Outreach effort which now has a default layer under the Global Awareness layer folder called The Elders: Every Human Has Rights. Stefan Geens of OgleEarth helped with the creation of this layer, and has more details.
Other layers introduced in the last week: