[UPDATE 2145 ET: I’ve created a quick video demo of 4.3 and put it on YouTube …. And, here is a YouTube demo by Google of 4.3].
Google Earth 4.3 (beta) is now available – it’s available for all versions including the free version. You can download it from the Google Earth download page or download it on GEB’s download page. The Google Earth web site has been updated, and the User Guide now reflects 4.3 tips.
This is Google Earth 4.3 (beta) – an incremental update with new features and some pretty cool new data as well. Based on the last release, we’ll probably see an update to this version, fixing any problems that surface for the beta, and an official 4.3 will be released in a few weeks. Also, this is NOT a major new version (which presumably would be called GE 5.0 – and would contain a whole suite of new capabilities, data and interfaces). However, as mentioned in my earlier post, there are some significant new features.
First off, we have new day/night lighting effects. You can turn on a real-time sunlight which shines on the new atmospheric lighting Google has added. Look for the new sun icon in the upper middle (next to the new Sky button). Once it loads, you will see the current position of the sun. You can grab the time slider to change the sun over the course of a whole day so you can see the sun from sunrise to sunrise. Note that the lighting effects the atmosphere, so you actually get color changes near the horizon, and on clouds (if you turn on the Weather->Clouds layer). Here are some sample screenshots showing the lighting effects: 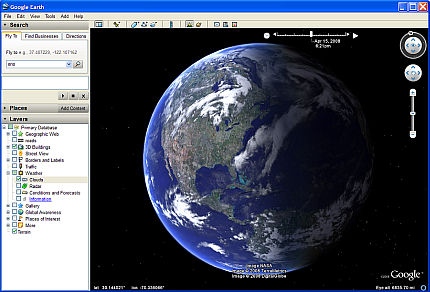 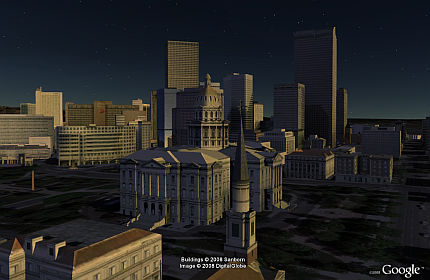 Sunrise in Denver with 3D Buildings
I expect there will be some pretty screenshots showing some cool lighting effects in the coming days…
Keep reading this post for more details and screenshots. 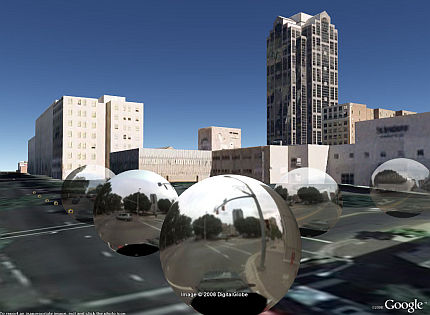 Street View in Google Earth
Next up – New and faster 3D models. Google has optimized the loading and performance of 3D buildings. When you first turn on the 3D Buildings layer near a city with models, you’ll see simplistic versions of the buildings load up really fast, then they gradually get more solid and load more texture detail. Meanwhile, performance of the scene updates quite speedy. This is a huge improvement over 4.2 which would get bogged down on a city like Denver which had hundreds of models. For models which come from the Google 3D Warehouse, when you float your mouse over a building the model highlights in “blue”. If you select it, you see a placemark description telling you about the model and providing a link back to 3D Warehouse. But, here’s some real news! It just so happens my home city is Raleigh, North Carolina. Raleigh is one of several cities with hundreds of new buildings which appear to have been automatically generated. I’ve asked some Googlers about this, but so far they’re not telling me where they came from. But, practically the entire city area has photorealistic 3D buildings (but, no trees!). I have no idea how many cities have the new buildings. But, here’s a few I found: San Francisco, Baltimore, Raleigh, Charlotte, Boston, Orlando, Austin, Oakland, and Phoenix (let me know if you find more). You can tell if they are the new ones because they don’t highlight “blue” when you put your mouse on them. Here’s a screenshot of San Francisco: 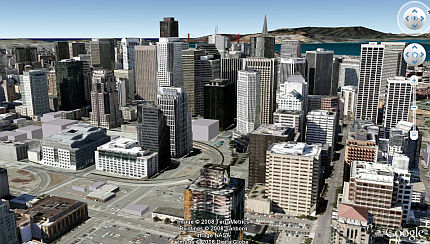 San Francisco in Google Earth 4.3
One other thing – I noticed Google favors showing a user-built 3D model over the new “automatically” generated buildings. So, you’ll see a mixture for most cities of the two types. [UPDATE 4/17: Google has posted more details about the 3D Buildings in 4.3]

Next up – New navigation gadgets and controls. This one will be a little hard to explain in words. I’m going to have to do a video to demonstrate. The intent here is obviously to help people realize Google Earth is really 3D. I’ve always been surprised by the number of people who use Google Earth and only look straight down (like with Google Maps satellite views). Google has tried to address this with the new gadgets. First, the new zoom gadget at the bottom seems to work the same, but when you zoom in close to the ground it will tilt your view increasingly to the horizontal. Next up, the middle gadget does panning pretty much like the normal gadget. The really new feature is the top right gadget. The gadget with the “all-seeing-eye” (I imagine lots of people are going to make jokes about Google putting the “eye of providence” in Google Earth). This gadget allows you to look around in 3D like you are standing in one place. It takes some getting used to, but if you are in a city, or near 3D terrain, it really works pretty slick! Another tip, if you click your Middle Mouse Button, you now get a marker for the place you clicked and you can hold the button down and use your mouse to tilt and rotate about that point. This is a little different than in previous versions of Google Earth, but it works pretty well. I’ll give more details and a video in a future post about this. Important tip: to get your self re-oriented quickly – click in the 3D window and then hit the “r” key on your keyboard. This resets to “straight-down, north-up” viewing.
And, now for Imagery dates. This one is really simple. Zoom in to imagery and put your mouse over it. If you are close enough, and the imagery has a date available, you’ll see a date appear in the status bar at the bottom. Like this:

One other major new feature is Mac support of Flash (works pretty much like with Windows – but, there’s some weirdness with YouTube playback). And that’s all I have time for now.
[UPDATE – here’s some more GEB thoughts and details on the new release.]
If you’re having problems with Google Earth 4.3, report them to the Google Earth Support Forum, or read this post for some pointers on 4.3 and instructions on how to go back to 4.2.