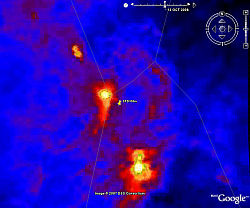 In yet another example of the power of KML and Google Earth’s powerful developer features, someone has developed a cool new feature which lets you view multiple wavelengths of stellar objects as an animation in the Sky mode. Robert Simpson is a PhD student in Astronomy who posted the new feature at his blog Orbiting Frog. What he did was create a KML file

which when you zoom in on an area of the night sky – it fetches imagery from the NASA Skyview database. (Note:– it can take a while to load because it is loading multiple images in different wavelengths of light for that area of the sky from the NASA server.) Robert’s application overlays the images and uses the time slider to allow you to view each wavelength as an animation. Currently the time slider just shows a different date for each wavelength (kind of confusing, but he is re-purposing the time slider for a different application). However, the resulting effect is quite amazing! Just drag the time slider in the upper center and you can see the images in different wavelengths. Move to a new area of the sky to load a different set of images (each time you move it has to load a different set).
By the way, Sky also has a number of high resolution images built in to the layers from different observatories showing different wavelengths of light. Some of the images are very high resolution, others are simply amazing alternate views of objects we are used to only seeing in the optical wavelength. If you look at the layers in the lower left and open the Featured Observatories layer folder you will see a list showing:

Important tips: If you select one of the showcases, you need to look for a corresponding placemark and click on the image in the description bubble to fly to the location. Then make sure the image layer is turned on by selecting “Show this layer“. Turn off each layer when you are done so you can return to seeing the original imagery. Advanced tip: This is a little-known trick built in to Google Earth/Sky – If you select the layer on the lower left (it will be highlighted), you can then use the transparency slider above the layer pane to change transparency for the imagery in the given layer. This is another way to compare wavelength imagery in Google Sky, and has a very cool effect. You can also do that with Robert’s SkyView overlay to compare imagery.