Google Sky was introduced in August 2007 as a part of Google Earth. It takes the idea of a zoomable Earth with high resolution aerial and satellite photography and turns it inside out letting you look at the nighttime sky. But, instead of pictures of the Earth, Google gathered photography from the world’s best telescopes and the deepest pictures of the night sky. It’s a fantastic application with a rich source of data and built on a foundation of Google Earth technology which many people are comfortable with using. 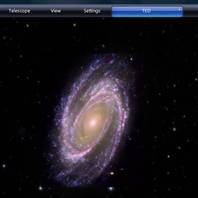 For the past few weeks, rumors had been building that Microsoft would be releasing a new product called WorldWide Telescope (WWT) which would be “significantly better” than Google’s Sky. Robert Scoble stirred the rumor when he said he saw a Microsoft product that “made me cry“. TechCrunch later said they guessed it was the new product WorldWide Telescope, which Scoble has now confirmed. (What I’m wondering is if Scoble had ever even seen Google Sky before all this) As TechCrunch predicted, Microsoft did briefly demo the new product at TED this week (see video below). Unfortunately, Microsoft said the product won’t be released to the public until sometime this Spring. Microsoft has put up a web page for WWT that shows kids and notable people’s reactions to WWT. It’s definitely a real PR spin – especially when you consider the product hasn’t even been released! So far I’m not impressed with what I’ve seen of WWT. There was nothing I saw in the demonstration of WWT at TED that Google Sky doesn’t already do.
To be fair, watching a 5 minute demonstration isn’t a way to make a fair comparison. I have spoken to some folks who have seen WWT up close and asked them how it compares to Google Sky. It is said the interface of WWT is very slick and the graphics perform very well. In demonstrations it could switch databases much more quickly than Sky (but, the demos may not have been with data streaming over the network). Some of the imagery in WWT has been better processed than Sky. Google’s Sky has a problem due to it being an extension of Google Earth – the “poles” are not handled well. WWT was not built on the roots of a 3D globe, so it doesn’t have this problem. Here are some interesting comments on WWT from Alan Boyle at MSNBC. One thing I haven’t seen anyone else mention: WWT doesn’t run on anything but Windows. That’s right, no Mac OS X, no Linux. And, it has been said WWT will only run on newer computers with faster graphics cards. One of Google Earth/Sky’s greatest accomplishments is that it works on a wide range of computers and graphics cards and all three of the major OSes.
The real test will be how well people will be able to annotate and extend WWT. Google Sky has had many people adding content to make it an even better project. Check out this planetary orrey, this real-time horizon, lunar eclipse predictor, and there’s a lot more. Already, Sky is available to the millions upon millions of people who have installed Google Earth (over 350 million installations at last count according to Google). Also, comparisons have been made between Sky and Stellarium (an open source planetarium program). I think Stellarium is a very slick and nice program. But, it’s more of a complement to Sky, not a direct competition. Stellarium doesn’t have the rich database of online server with terabytes of astronomy data like Sky (and like WWT will have). I suspect WWT will have some elements like Stellarium – more planetarium-like features. But, WWT is obviously more of a competition for Sky.
(Keep reading for the TED WWT video and conclusions)

Here is the video of the TED demonstration of WorldWide Telescope:

The three main features the presenter liked the most are things Google Sky already does: 1) lets you experience the universe, 2) let’s you tour the universe, and 3) let’s you make your own tours. To see this now in Google Sky – bring up Google Earth (Download GE 4.2 here if you don’t have it) and hit the “Switch to Sky” button in the upper middle of Google Earth. Try out the various tours you’ll see and dive into the universe right now.
Personally, as an astronomer, former planetarium employee, and computer graphics buff, I’m thrilled that Microsoft is going to be introducing even more astronomical data and slick graphics for us to play with for free. But, I think trying to make this as a big media event and part of its competition in the business world with Google is ludicrous.
Come back here in a few months after Microsoft releases theirs, and we’ll do a real comparison.