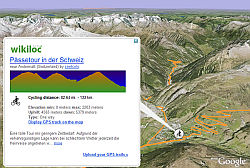 Wikiloc is a free web site which lets you share your favorite GPS tracks through a Google Maps mashup or through Google Earth. Its focus is on trails – and it shows the elevation profile as a graph with every track. Tracks can also have photos and video clips associated with them. Wikiloc won a Google Maps mashup contest in Spain in 2006, and continues to make nice improvements. The site’s author, Jordi Remot, wrote me this weekend to say he has reached 10,000 uploaded GPS tracks. So far most of the users are in Europe, but he has very good multi-lingual support, so hopefully he’ll get more users from even more countries.
What I particularly like is that Wikiloc provides good Google Earth integration as well. You can view any GPS track you see on the site also with Google Earth. And, at the top of the web pages is a link to “discover GPS trails

” with Google Earth. This is a well done GE KML file which uses regions to pull in more tracks as you zoom into a specific location. It not only shows the icons, but also provides a sample of tracks right away. Placemark icons indicate the types of tracks (hiking, biking, skiing), and if you click on a placemark you get an option to display that GPS track, or view more info at the web site. The placemarks also show the elevation profile.
One other thing I like is that in the Google Maps mashups, Wikiloc also shows the Panoramio photo layer so you can see photos from other people for locations your viewing. Of course, you can also turn on this layer in Google Earth. It’s a handy way to get more perspective for a particular trail/location.
There are dozens of sites out there where you can upload your GPS track and share it with others. The best ones include ways for you to view in Google Maps and Google Earth, provide statistics about your GPS data, embed your map in a mashup on your own site, or annotate your data with other information like photos or videos. One of my favorites is Magnalox (see an example where I used it) because it has some of the broadest range of mapping features out there. Here’s a list of just a few sites and tools for GPS tracks I’ve written about: