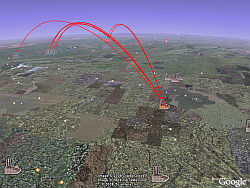 In the official Google Blog, Robert F. Kennedy Jr. writes a blog post about the travesty of mountain top removal coal mining which is right now doing irrevocable damage to the environment in the Appalachian mountains. Most people would never drive up into these remote mountains to see the damage the mining has caused (which is one reason why the mining industry has gotten this far). But, thanks to Google Earth you can see the damage in its satellite and aerial photos. RFK highlights the Google Earth visualizations created by a non-profit in Appalachia which lets you see a memorial to destroyed mountains. Furthermore, the same organization has created a tool which lets you see whether energy you are using at your US house is connected in some way to the coal mining in Appalachia. Simply enter your zip code, and it will show you connections your energy sources have to the mountains on a Google Map. And you also get a link to view a 3D version in Google Earth.
Those of you who are regular readers of GEB, know that I’ve featured this campaign to end mountain top removal several times (see here, here, and here). The Mountain Top Removal memorial data is actually available in the “Global Awareness” layer folder if you turn on “Appalachian Mountaintop Removal” layer. This excellent visualization is a favorite example of the power of Google Earth visualization and is highlighted by the Google Earth Outreach program.
I think it is excellent that Google has helped give some much needed increased visibility to this important campaign. It is simply horrifying to me to realize the type of environmental damage that the coal industry has been allowed to get away with for years in these mountains simply because people couldn’t easily see what they were doing. The US government has a lot to answer to its citizens over this, because there is no way they were not aware of the damage that was being caused.