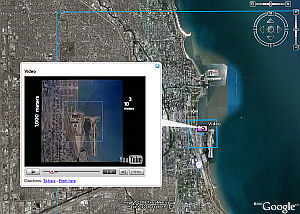 Richard Treves of Google Earth Design posted today about a movie called “Powers of 10” created by Charles and Ray Eames for IBM which illustrated the scale of our universe from the macro to the micro scale. It was a great idea and their video was a brilliant design which is just as powerful seen today as it was when it was created in 1977 (link to YouTube version). The movie zooms out from a couple in a picnic at a park in Chicago to the outer edges of the universe, then zooms back to sub-atomic particles.
Richard decided to at least show a subset of the powers of 10 in Google Earth. You can’t zoom much beyond the Earth in GE, and you can only zoom in to a level where you can see the size of the people in the picnic. Richard said the actual location of the scene from the movie has been changed – so he overlayed an image of the park and the people from the movie. He shows outlines of the powers of 10 with placemarks for each level just like in the movie. You can zoom in and out to get the effect. Check it out!

Even though its a subset, it still has the same effect – except that you can perform this in 3D all over the Earth of course!
By the way, the “Powers of 10” movie was a part of the inspiration that led to the development of Keyhole which later became Google Earth.