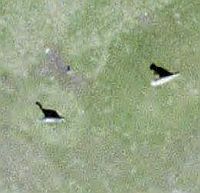 Did you know you can see dinosaurs in Google Earth? Just a few months after GE first came out, someone spotted a satellite photo with dinosaurs (you can clearly see their shadows) walking our modern-day planet right next to a manufacturing plant near Alpha, New Jersey! And, now someone has recently started putting together a collection of placemarks

showing dinosaurs known to be visible on the planet around the world. There are already about 3 dozen locations in the US and Europe, and in many of the locations you can actually see the dinosaurs in the satellite/aerial photography. Make sure you turn on the Geographic Web layer while looking at some of the dinosaur locations. You will sometimes find links to photos and/or more information about the location.
Not too surprisingly, most of the locations are near science museums. And of course, these dinosaurs are all pretty much fixed in position – since most are made of steel, concrete, plastic, or wood. By the way, if you know of a dinosaur visible to the sky which isn’t in the collection, you should help ‘Felippo’ out and post it to the thread at the Google Earth Community. Surely there are some in other parts of the world than the US and Europe?
In 2006, GEB had a story about some of these same dinosaurs, and provided more information on the ones at Alpha, New Jersey. By the way, you can also see a caveman between the two dinosaurs if you look closely there.
NOTE: see follow-on post regarding using Street View to look at at least one of these dinosaurs.