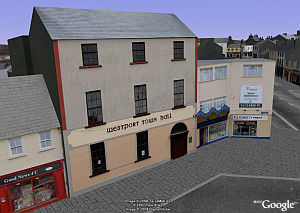 A week or so ago I saw some stories in the blogosphere about the town of Westport in Ireland getting a 3D version of itself in Google Earth to be released on January 16th. The stories said things like “Westport to be the first complete city in Google Earth”. I didn’t report on it because there were a lot of stories saying it was the first, which is not right. There are already some pretty impressive 3D models of large cities like Berlin, Denver, Las Vegas, Hamburg, Dresden, and even places like Beaver Creek, Colorado.
Anyway, I went and looked today, and sure enough if you search for “Westport, Ireland” in GE and turn on the “3D Buildings” layer it will begin loading a number of 3D models for the town. These buildings have high resolution photo textures which let you see and read signs on the fronts of stores, and even see merchandise in some of the windows. This also means they will take up a lot of memory, so make sure you have a good graphics card in your computer. Other interesting techniques in the collection is a detailed terrain base model for the town with the streets and sidewalks also textured and modeled. Even the bridges and water in a river are modeled.
According to some of the blog entries from last week, the models were created by AMT3D. The current models in GE are not a complete rendering of the town. It appears only a few blocks of three of the main streets are available at the moment. screenshots from the website of the modelers show they have more models available. So, I’m not sure why the GE version is not more complete. And, some of the other cities in Google Earth like those mentioned above have even more impressive collections of 3D buildings (both in terms of size and architecture).