Google Earth has many layers of information which provide context to the things people are interested in learning about. Unfortunately, there is so much information, a lot of people overlook the information. And even someone like myself who is constantly following Google Earth developments can’t keep up with everything in there. Google has made several attempts to reorganize the layer folders to make it easier to find things as they have continued to add more and more layers. But, I believe they need to greatly improve the interface itself. Further, I can’t believe Google hasn’t done it, but there’s no mechanism to search for layers. Aren’t they a search company? It would be so much easier to just type a quick search to find a layer rather than searching through the layer folders.

Anyway, today I happened to take a closer look at the Water Bodies layer. This layer is harder to find than it used to be. It is part of a layer folder called Geographic Features which is found inside the large folder called Places of Interest which is found near the bottom of the main layers list. The Places of Interest layer folder contains all the kinds of information you expect to find on a localized GPS system (restaurants, hotels, hospitals, schools, etc.). Not all countries have this information, but Google is continuously adding new countries every few months. In some cases, like India, Google is using “crowdsourcing” (asking locals to document information with GPSes) to get the information (including roads). 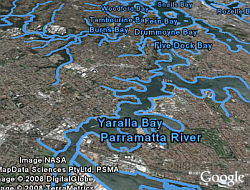 Anyway, the water bodies layer in GE has mostly been disappointing to me. In the US, most of the water bodies have crude vector outlines, and most of the water bodies have no labels. Not even the Mississippi River! As a pilot, I very much enjoy having a GPS which tells me the names of rivers and lakes as I fly over them. My GPS from 1998 is better than what GE has in it for water bodies. Anyway, today I decided to explore the water bodies layer again for the first time in quite a while. I discovered that the layer is starting to improve in some areas. More countries appear to have at least basic vector outlines. And many countries in Africa now have some labels for lakes and some rivers. But, the biggest discovery is that Australia has a fantastic water bodies layer! This layer not only has labels, but it also has detailed layers of water outlines – as you zoom in, you get more details. Even many creeks are labeled. The only issue I’ve had is that sometimes the labels are hard to get to appear (the zoom levels have a limited range in which they show the labels – this appears to be a general problem for the layer no matter what country you look at). Still, I wish other countries had better water body information like this!
Related: