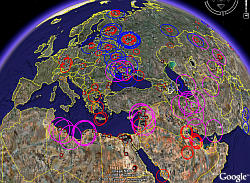 In a project started almost two years ago, a Google Earth Community member named Sean O’Connor has been documenting the locations of Surface to Air Missile (SAM) sites around the world by using the satellite and aerial imagery from Google Earth. This is a form of IMINT (IMagery INTelligence) normally performed by military intelligence personnel. But, now amateur analysts are performing similar work with public domain imagery. Only some of these amateurs seem to do a pretty good job. Sean has already documented, with help from other members of the GEC, nearly 1400 SAM sites. He not only identifies the sites, but also identifies the type of missiles located at each site and then uses colored circles to indicate the range of each missile site. See the collection here

and select the “Range Rings” folder and the “SAMs by Country” folder to see the information. The collection is posted/maintained in a thread at the GEC here.
Sean has an interesting blog called IMINT & Analysis where he documents many other subjects of IMINT and performs other interesting military analysis using GE imagery. He calls his work “open source military analysis”. An interesting concept I think. Recently he blogged about the techniques he uses to search Google Earth for interesting content. These are similar techniques used by myself and others to find planes in flight in the GE imagery. Sean has done some excellent work. And, he’s only one of several military analysis enthusiasts out there.
If you are interested in finding other information about military related things found in Google Earth, read the two forums at the GEC: Military (moderated) and Military (unmoderated).
Here are some other interesting military finds people have made with Google Earth: