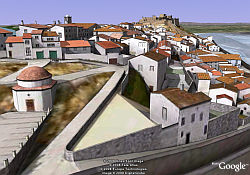 A couple of weeks ago, I mentioned how a town in Ireland was added to the 3D Buildings layer in Google Earth. Google is constantly adding models of buildings created by people all over the world into this layer. So, each time the layer gets updated there are lots of interesting things added. A GEB reader sent me a tip that the beautiful mountain-top town and forts of Marvão, Portugal (here’s an article about the town) has been rendered with an excellent collection of 3D models. To see it, follow this placemark

(which will take you to the location of Marvão – which shows a cloudy satellite photo – don’t worry). Next turn on the 3D Buildings layer in the lower left of Google Earth. This will cause Google Earth to load the 3D buildings of the area you are looking at.
Whoever created these models (anyone know who did this?) did an excellent job by first creating a 3D terrain model which has a better aerial photo overlayed. The buildings are done with great care – obviously using photo textures, and there are also many little details such as pedestals, sign posts, and more. If you don’t have a SpaceNavigator (which makes it really easy to fly around 3D models), try watching this video tutorial on moving around in Google Earth. Don’t forget to try holding down the middle mouse button to move around.
Also, to see more of this town from a tourist perspective, just turn on the Geographic Web layer to see placemarks showing dozens of photos taken by people visiting the site. Both the 3D models and the photos make you want to visit this place.
Related stories: