A few weeks ago I was wondering what interesting things I might have flown over when I flew a plane out to New Mexico. I figured if I put the GPS track into Google Earth, turned on the GE Community layer, and zoomed along the track – I would see what things I missed during the trip. After a few minutes of searching, I suddenly realized I missed something I’ve wanted to see for years now! I missed LUECKE! 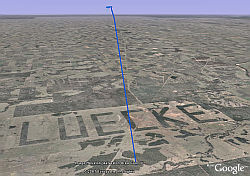 Some of you may have heard that a Texas landowner named Luecke decided to immortalize himself by selectively clearing trees on his ranch to form a 1 km tall, 4 km wide version of his name along the flight path from Austin’s airport. See LUECKE in Google Earth

. The name is so big, that NASA has been using LUECKE (see bottom of page) to measure the resolution quality of photos taken from space.
So, if you load up my GPS flight track in Google Earth

, and then double-click back on the LUECKE placemark, you can see I flew almost dead-center over Luecke. How could I miss it?! First off, it would have been unlikely I would have seen it in front of me. The front-down visibility is cut off by the engine and instrument panel. And, because I went directly over it I would have had to been watching very carefully almost straight down to have caught it. The key lesson I took from this is that I should review my flight plans in Google Earth and make sure I look for interesting things I should be looking for before I make the trip. Of course, your flight plan is always subject to Air Traffic Control making changes mid-flight.
For those of you wondering, I went to New Mexico to see the X PRIZE Cup.
Also, here is a photo someone took of LUECKE from a plane.