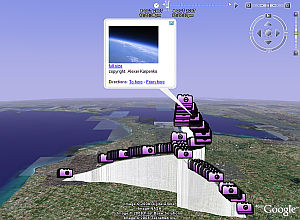 Apparently, flying high altitude balloons is an emerging hobby. A guy named Alexei Karpenko (and a team of others) managed to fly a helium balloon in Canada to 30 km above the Earth (you can see the sky is black and the curve of the Earth in the photos). You can read a full description of his project including lots of photos, video clips, diagrams of the equipment and more at his lengthy web page. He used GPS technology and cameras to track the balloon’s flight and document the flight. But, the most important thing is that he created a couple of Google Earth files so you can see the path of the balloon as it ascended and descended. You have your choice of the flight with photos

, or the flight with embedded videos

. You really get a sense of how big the Earth is and how close the balloon got to space when you realize 30 km is high enough to get these pictures. If you watch the videos, you can see that the balloon is still getting blown around by the atmosphere at that altitude. (A balloon can only go so high before it’s lighter than air characteristics don’t work.) The edge of space (where the atmosphere ends and space begins) is typically described as 100 km for the Earth.
It would be really neat if he considered using the KML 2.2 PhotoOverlay feature to actually position each photo in the same orientation as the photo was taken. He does include a folder called “Timeline” you can turn on which includes a timestamped position indicator of the balloon trip so you can get a sense of the direction of the flight using the GE time-slider.
By the way, if you read his web site, they used the GPS technology to track the balloon and follow it in “chase cars” so they could find it when it landed. Apparently they design it so the balloon is burst to accelerate its descent (so it doesn’t go too far away) and use a parachute to slow its final descent. On this flight it didn’t properly deploy, but their payload was designed well and the equipment survived undamaged.
via RemoteSensingTools.com – Thanks for the tip Daniel!