[UPDATE: the shuttle launch was postponed yesterday. The Google Earth file here has been updated to reflect the new ascent profile for the slightly changed departure time for the next launch attempt on Saturday 8 December at 16:09 EDT. The author of the content says he will update it if the launch is postponed again.] 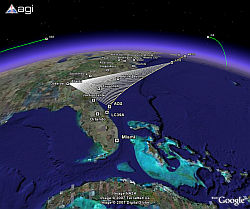 The folks at Analytical Graphics, Inc. have created a Google Earth file

which shows the ascent profile of the planned launch today of Space Shuttle Atlantis (mission STS 122). Launch is scheduled for 16:31 EDT today out of the Kennedy Space Center (see Space.com story). Once you load the GE file above, the orange line shows the path of the shuttle from the launch pad until the main engine cut off (MECO). If you zoom in to the bottom of the path, you can see the launch pad 39A where the shuttle will be launched from. Once you open the file above, you see a series of white lines in a fan-like shape. These are sight lines of the shuttle as viewed from Atlanta. You can also go to the folder called “Visibilities” and turn on and off sight lines for a number of other cities where the shuttle launch could theoretically be seen (depending on weather, haze, etc.). The green line shows the orbital position of the International Space Station.
AGI is a graphics technology company serving the space and US defense industries. They have a free graphics viewer which lets you view space events in 3D. A web site called CelesTrak has developed an STS 122 launch event file using the AGI viewer. The free AGI viewer for Windows is a large download (about 75 MBytes), and you have to fill out a free registration form to get it. But, the views look really cool.