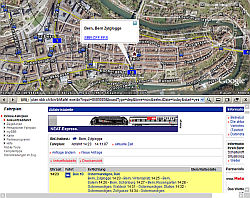 Google has announced a new localized version of Google Maps for Switzerland. As always, the maps include road information and directions. And, there is even public transit information from local transportation providers. This is part of a bigger effort which Google has also announced for European public transit information. The same information is also available in Google Earth. See the screenshot which shows a closeup in Bern, Switzerland with the Transportation layer turned on. A bus stop is selected and clicking on the placemark takes you to a web page showing detailed bus stop information for today’s buses.
But, the Google Earth content for Switzerland has so much more to offer. Switzerland was the first country to receive high resolution 3D terrain in GE, and the Swiss Alps are totally awesome to view (see a video flying tour of the GE Swiss Alps from a few months ago).
Yet another way to explore the Swiss Alps in GE is using the driving directions. For example, enter “Attinghausen to Silenen” into the Fly To search pane in Google Earth and you will get driving directions. Then select the “Play” button below the directions. You will get a flying tour of the driving directions. If you go to the “Tools->Options” you can adjust your height and tilt so you can see the mountains while touring the directions. Not only that, but if you turn on the Places of Interest layer you will see Google has even added the ski lifts in Google Earth in Switzerland as well. The imagery is high enough resolution that you can see the buildings housing each end of the ski lifts!
Here is a video showing how all this looks in Google Earth: