Yesterday, TechCrunch writer Duncan Riley got soundly slapped by his readers for posting a story with the headline “Google Earth Heading Towards Extinction?“. He said because Google has recently announced some new features for Google Maps, this must mean Google Earth is on “borrowed time”. Anyone who actually uses Google Earth and compares it to Google Maps, knows that the beauty and richness of Google Earth is not going to go away any time soon. The 3D capability for looking at the Earth, the abilities to overlay information, and the simple and powerful interface of Google Earth is here to stay. All you have to do is read some of the stories on this blog to see there are many powerful ways to use Google Earth that even Google didn’t imagine. 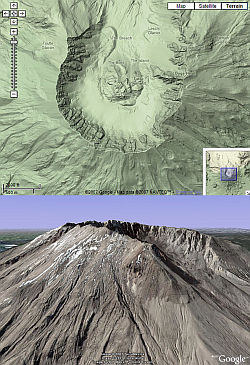 All that being said, I think it is worth noting that Google Maps is evolving more rapidly lately than Google Earth. Google has added a flood of new features and capabilities to the 2D product. But, let’s remember it was only a few months ago (late August), that Google added some pretty significant new capabilities to Google Earth: anyone forgetting the new Sky mode, the YouTube layer, or the amazing Flight Simulator mode?
I believe Google will continue to borrow capabilities from Google Earth and incorporate them within the web-based product (Google Maps). In fact, someday I believe the two will merge in some ways. However, as several people pointed out in the comments to the TechCrunch article, it will still require at least a separate plug-in application to run real 3D from within a browser. At least until browsers become 3D. Google Earth’s performance in 3D (as amply demonstrated by the Flight Simulator mode), is a big part of the reason why it is a separate application. But, the other important reason is that the interface for browsing information in GE is a different paradigm from the normal web browser. It wasn’t long ago that Firefox had fewer downloads than the 250+ million people who have installed Google Earth. A few more killer applications of data for Google Earth could make it so indispensable everyone will have it installed (maybe Mac OSX will start shipping it by default?).
Google Earth will evolve as well. It has already changed dramatically in the several years since it was created. Like any other popular software, it too will continue to change and grow new, and hopfully better, features. Yes, I write about Google Earth every day. But, check out Mount Saint Helens

in Google Earth. Viewing features of the world like this in Google Earth is so much better than Google Maps – even with the new 2D relief maps. ‘Nuff said.