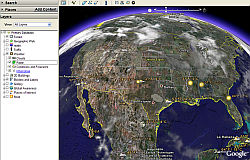 Google has made some big changes to the layers! First the layers have been re-organized substantially. You may have to hunt a bit to find things under new folders. For example: Featured Content is now Gallery, Populated Places falls under Borders and Labels, the many layers describing stores, geographic features, sports venues etc. are now under Places of Interest. I suggest you play around by opening folders and trying out layers to learn the new organization. Click on the “+” and “-” boxes to open and close the folders. The new organization is an improvement, but I still think a new interface for layers is needed.
The big new content layer is the new Weather layer. This is something I’ve wanted to see since the beginning. Right now, the new weather layer contains three sub layers: Clouds, Radar, and Conditions and Forecasts.

There’s also an Information link which provides a good summary of the sources of the data and how to use them. Most of the data in this release seems to be managed by Weather.com – although the clouds come from the Naval Research Labs’ Marine Meteorology Division. Note: the radar data provided by Weather.com is only for the US at this time.
Make sure to click on the “Information” link, because in the upper right you find two links which let you download time animations for the clouds and radar respectively. An information bubble for each network link loaded in your Temporary Places explains how to use the time animations.
I’m really glad to see the new weather layer. The clouds layer from the Navy Research Lab in Monterrey looks quite good. It is updated hourly. For many other stories about weather-related KML files, check out the GEB Weather category. Also check the best GE storm tracking tools post for lots of other useful weather tools.
By the way, thanks to Volker at Magnalox.net for the tip on the new layer update – he has been monitoring his new Caribbean 1500 Sailing Cup, so he was quick to notice the new weather layer.