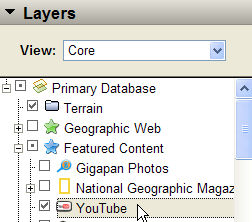 Google has added a new layer today to Google Earth’s Featured Content Gallery layer folder (UPDATED). The layer allows you to view YouTube videos which have been geotagged (some of you may remember Google added the ability to map your YouTube video back in June). I predicted then that we would see a layer allowing us to see YouTube videos in GE, and here it is! NOTE: as you zoom in closer to a place – more YouTube placemarks appear. This is to attempt to keep the view from being too cluttered. There are a LOT of videos already geotagged. You can watch surfers in Tahiti, Penguins in Antartica, and lions in Africa. Amazing stuff! Google Earth really is becoming a way to view the GeoWeb – all types of web-based information are viewable now in Google Earth including: photos, blog posts, GPS tracks, maps, weather, and now a great wealth of video content.
Important caveat: on Windows you can view the video embedded inside the placemark description bubble (GE version 4.2+ only), but with the Mac or Linux you will have to click on a screenshot from the video and view the video in your browser instead. Embedded flash apps like YouTube videos only work with Windows at this time for GE 4.2.
If you want your YouTube video to appear you need to map its location and allow embedding of your video. Google will periodically update the layer to show the latest videos (based on past experience with other layers this may happen every 30 days or so).
via TheTestBed
[UPDATE: and now here is the Google LatLong post about the new layer – no new information though.]