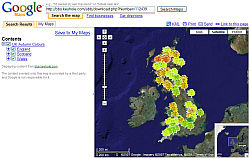 Last night Google announced improved support in Google Maps for more sophisticated KML files. In particular, KML files which use network links whose content in based on your current view are now supported in Google Maps. Google gave some examples of KML files used in Google Earth which work now in Google Maps like: Panoramio photos of the world, and Wikimapia. Cool as they are, they both have their own Google Maps versions – which you can find by browsing the Google My Maps directory – which work a little better (Panoramio uses smaller pictures for their My Maps version).
Mickey of Gearthhacks.com is quite excited that several of his network links work quite well with Google Maps – see his GearthHacks most popular network link for lots of interesting sites (make sure you’re in “satellite mode” in Google Maps).
Initially I was also excited about this announcement and I rushed to try some of my favorite network links in Google Maps. But, I found many still would not work – or at least parts of them failed. I was surprised the USGS Earthquake Monitoring KML didn’t work (but, they have a My Maps version at least). Global image overlays still aren’t supported in Maps – so my favorite real-time global clouds network link still isn’t supported. The ones that work or don’t work are hit or miss at this point. But, obviously Google intends to continue to improve KML support in Google Maps.
Here is one very nice network link which works with Maps: UK Fall Foliage (read the story on it here). It’s a network link which shows the current color of fall leaves in the UK. Also, the large KML collection I developed documenting our sailing adventures in the Caribbean works quite well now in Google Maps (see post).
This new support for network links will enable people to develop even more KML files which will work with both Google Earth and Maps. And, they won’t even need to learn the Maps API to do it.