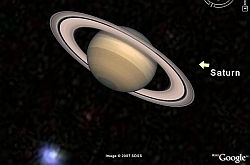 When Sky first came out about a month ago, Google included a simple animation showing how the planets move in the night sky using time animation. The planets were represented by little icons, but their relative size were not shown properly. Enter James Stafford, aka ‘Barnabu’ at the Google Earth Community, and creator of many innovative KML visualizations. He has posted at his blog a couple of nifty new planet implementations which really add value to Sky in my opinion. First, James loads the current position of the Sun, planets and Moon for the current day and time. He put an arrow icon for each position so you can see them at any zoom level. He then decided to implement image overlays of the planets, and our moon, which are represented with their true size as seen against the Sky’s scale. And, each body is shown with a nice color photo (if you zoom in and look – double click on the arrows to see them close up). Not only that, but he chose to represent the moon in its current phase (crescent shape, full or new moon). James then made available his file as a network link – so you can turn it on and it will load the current positions of the planets and moon into Sky and keep it handy in your My Places. Download the Sun, Planets and Moon

, and try it out. Read details at the Barnabu blog.
Of course, one would like to be able to show the planets and moon position over time. So, James created a time animation showing the planets over a 60 day period (30 days in the past and 30 days into the future). It also shows the track over time of their position so you can see the way the planets move. And, again, the moon’s phases are properly represented. Download the Animated Planets

. You need to select the folder and then use the time slider to see the effects. Please note that this animation file has a lot of data, and may slow down Google Earth while it processes all the data. And again, more details at the Barnabu blog.
In order to see your current horizon in Sky – so you know which stars are visible tonight, you should check out this excellent horizon add-on by Michael Kosowsky.