En Español
[UPDATE 1-October, 2008: Steve Fossett’s pilot’s license and other items found near Mammoth Lakes, California. Read the story and a link to the area where they were found in Google Earth.]
[UPDATE 14-September: A new KML has been posted with a strip of DigitalGlobe imagery. I’ve updated the links below to include both sets of imagery with red borders outlining the imagery. Don’t bother looking outside the new imagery. The GeoEye imagery is turned off by default – you have to find the folder to turn it on, most of the comments below are from the GeoEye imagery. It would be better if everyone went to the new story I’ve posted and started your comments here: New Steve Fossett Search Imagery]
[UPDATE: I’ve made a new network link

which has the imagery, but also includes a red border around it. This will hopefully avoid confusion since some people are looking beyond the available search imagery.] 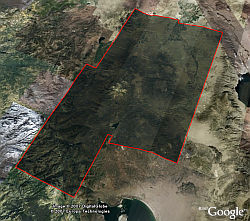 As most everyone knows by now, famed adventurer Steve Fossett went missing last Monday, September 3rd, after leaving a small airport in west Nevada in a small single-engine airplane with blue, white, and yellow colors on it. The area of Nevada where he went missing is very rugged terrain, and so far the search and rescue aircraft have not been able to locate the missing plane. New satellite imagery of the area taken by GeoEye has been taken. Amazon has produced a Help Find Steve Fossett web site which automatically provides you with an image to look at in the search area of new satellite imagery. You have to sign up and give your address to help with the search. If you see something in the small area which looks suspicious you’re asked to flag it. The page also provides you with a network link which includes recently taken satellite imagery of the search area. You can load the network link in Google Earth

and start looking over the recently taken imagery for a portion of the search area yourself. Or copy and paste the coordinates you were given to get a better look at that spot.
This is an approach to more rapidly search a large area of imagery using many eyeballs of people around the world. A similar technique was used to search for Jim Gray, a Microsoft scientist who went missing on his sailboat off the coast of California. Unfortunately, in the case of Jim Gray nothing was found. In this case, if Steve Fossett did in fact stay within the region of imagery provided, someone should find some sign of the plane in the imagery (unless the plane managed to go into water and sink – I was surprised how many small lakes there are in the search region).