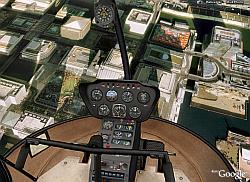 No, this is not another example of a new hidden flight simulator in Google Earth. But, it is an interesting application of the new photo viewer capability in GE 4.2 (download GE 4.2 if you haven’t already). ‘PhilRichards’ at the Google Earth Community created a spherical photo overlay using the new “Add Photo” capability. He chose a photo of an interior of a helicopter

, but what is really interesting is that the windows are transparent in the photo. So, you are looking out the window seeing the Google Earth view as if you were inside the helicopter. Use the mouse to move your view around and look out the windows. This is a very cool looking effect! Read Phil’s post to learn more about how he did this. The helicopter interior came from MS Flight Simulator X. The only thing is, you want to make the overlay move with you, but the photo overlay is fixed in position. If you could make this into a network link so you could just move to a new position and the photo overlay would reposition itself, that would be really neat. Anyway, great idea Phil!
As has been noted by others, the new photo-viewer in this beta of GE is still quirky. If you try to look too far to the right or left the overlay flips over looking totally wrong. And, it does really weird things looking straight down or up. Hopefully Google will fix these problems in the next beta release.