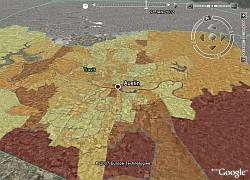 A new blog called GeoChalkboard has been started by Geospatial Training Services to provide “how-to” guides for GIS professionals focused on using Web 2.0 geospatial applications (like Google Maps/Earth, Virtual Earth, etc.) for GIS visualization. The first two entries are: Using the Image Overlay Tool for Google Earth, and Creating Google Earth Time Display Data with ArcGIS.
I especially like the time visualization article. The blog provides two examples showing the growth of buildings in Austin, Texas based on building permits from 1993-2003. The first is a vector analysis of building permit data by census tract and displayed as a graduated color map – see here

. Click on the time slider to watch the progression of new buildings. The second example uses the same data to create a “heat map” in raster format – see here

. Again use the time slider to see the effects. The article goes into detail showing how to use the ESRI ArcGIS products to produce these kinds of visualization.
Hopefully, GIS professionals will be able to use tutorials like these to learn how to share even more of their powerful datasets with the general public. If you are a GIS professional interested in doing this, I also recommend looking into the products by Brian Flood called Arc2Earth. These reasonably priced tools enable GIS professionals to more rapidly build powerful visualizations for Google Earth. Arc2Earth was first released in early 2006, but has evolved a great deal since that time, including support for Virtual Earth in addition to GE.