[UPDATE 2140: This new layer is apparently only available to English GE users. Apparently the Google’s Book Search content is not yet extended to other languages, so the layer isn’t available except to English version users. I think Google should just offer layers in other language versions, but label them as English only (or whatever language applies).] 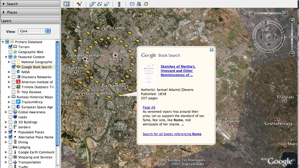 Google pushed out a new “Featured Content” layer today called “Google Book Search“. This layer, when you turn it on, shows little book icon placemarks when you zoom into different places around the world. You don’t have to enter a place into the search, just browse places and the placemarks will appear. These placemarks are results from search of places found mentioned in books indexed by Google’s search engine. For famous places like “Rome”, you will see a huge array of icons in a series of concentric circles. Each icons shows the results of that city mentioned in a particular book. There may be dozens of such references, but you you can click on a summary link that will take you straight to the book search results on a web page.
This is an interesting new way to explore information about places based on literary references. It could be very useful for scholars, school kids with projects, or just for learning even more about places you are interested in or want to visit.
Stefan Geens at Ogle Earth has already done a mini-review. He indicates that some of the search results have accuracy problems as the names of places in history are not always consistent with today’s maps. He points out that Google could use “crowdsourcing” by allowing people to click on placemark link to suggest corrections or better information.
Michael Jones (Chief Technologist at Google Earth) had attempted to preview this new layer on at least three occasions in talks this summer. I know this project was a bit of a pet project for Michael, but it was frustrating I never saw the demo work. With all the anticipation, I was expecting this layer would generate holographic projections of dead authors speaking quotes from their books! While it’s not quite that good, it will provide some entertaining new exploration.
It’s disappointing to not see any other new layers pushed out today. This one new layer doesn’t even have the usual “New!” moniker to help it stand out. Here’s the Google Lat Long blog entry about it.