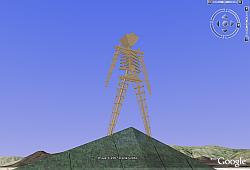 Burning Man is a difficult to explain event which occurs each year in the Black Rock Desert in Nevada for one week. This year it is being held August 27 (today) through September 3. Basically a wide variety of people build a city in the desert. There is art, music, drinking, and much more. There are basically few rules (except for safety). People build things and destroy things. They play, they party, and they even work. When the event is over, the entire city is dismantled leaving just the desert behind again. According to the web site, you really can’t explain it except by going there. But, you can read their “What is Burning Man?” article for more details.
During last year’s event, someone took aerial photos of Burning Man

and Google has included them in Google Earth. You can see the huge “city”, buildings, structures, and thousands of people in the desert. This year, there is a Burning Man KML file

that will show you in Google Earth the layout of the city, and a 3D model of the central area where they planned to install a huge burning man statue above a giant tent. Here is the web site with more details on Burning Man for GE.
I am expecting to get some reports from Burning Man this week including some aerial photos. Watch this blog for more. By the way, on the last night of the event, the big statue of a man is set to fire.