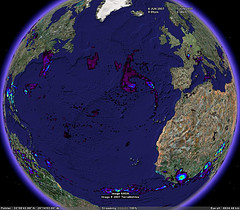 Valery Hronusov, who is often innovating ways to get data into Google Earth, has developed a Google Earth visualization from data at a NASA research web site to produce this near global near real-time rainfall time animation. That’s right, you can watch where rain has been falling over about a 12 hour time period. You simply load the rainfall network link

, and then turn it on to initiate the animation. It needs to load several global image overlays before the animation can start. You can expand the time animation interval in the time slider to get it to load them all. Once it is done loading, reduce the time slider interval to between 3 and 6 hours. Then hit the “Play” button on the right of the time slider.
The rainfall data comes from this NASA site. The Tropical Rainfall Measuring Mission (TRMM) is a joint U.S.-Japan satellite mission to monitor tropical and subtropical precipitation and to estimate its associated latent heating. TRMM provides systematic, multi-year, visible, infrared, and microwave measurements of rainfall in the tropics as key inputs to weather and climate research. The satellite observations are complemented by ground radar and rain gauge measurements to validate the satellite rain estimation techniques. You can turn on a “Legend” in the network link which will tell you what values of rainfall the colors mean.
Valery puts the data into a spreadsheet and then manages to output the results into a KML file. He has been a been advocate for using spreadsheet technology to convert data for use with KML. This is a pretty cool example of the technique, and is useful for getting an idea where rain is falling at least in the tropics. Great work as usual Valery!
Related – other interesting Google Earth visualizations Valery has produced, or been involved with producing: