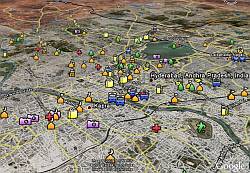 Google’s mission is to “…organize the world’s information and make it universally accessible and useful“. And the Google Earth/Maps team’s mission is to add “geospatially” in front of the corporate mission. Google has the most complete global/international coverage in imagery, roads, directions, and many other points of interest data of any other 2D/3D mapping tools freely available on the Internet.
The information now available for India in Google Earth and Maps is of particular interest. According to Googler Michael Jones, Chief Technologist of Google Earth, they had a challenge in India. There basically was only one government controlled mapping dataset, and it was not available to license for publication online. So, Google developed some tools and processes to enable people living in a city to map the city and share their local knowledge with an online database. They piloted a process in India where people would mark locations with a GPS and input other data such as directions, locations of shopping centers, parks, gas stations, restaurants etc. Google used input from many different people and correlated conflicts to try and arrive at the best data. The current trend is to refer to this kind of approach to data collection as “crowdsourcing”.
If you go to India now in Google Earth (or Maps) the roads information for 50 of the cities in India came from local knowledge. You can turn on other points of interest layers in Google Earth such as these layers: Shopping and Services, Transportation, Geographic Features, Travel and Tourism, Parks and Recreation, and Community Services. For example, try searching for “Hyderabad“. You will see a variety of colorful icons all over the 50 cities in India where the data was collected. This data could be remarkably beneficial if you were visiting a city for the first time – or possibly even if you’ve lived in the area for a long time.
The process Google has been testing (which produced these results in India) is similar in many ways to efforts started in the UK by OpenStreetMap.org which also uses GPS input from people on the streets. Google has been developing a special “care package” of software, databases, and GPSes to help citizens in other countries make maps like the ones in India.
You can hear Michael Jones’ talk about the maps for India in a podcast recording of a speech he gave last week at Cambridge in the UK – thanks to Philbridges.com for the recording.