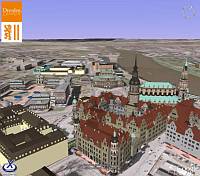 The City of Dresden, Germany published today a huge collection of 3D building models of their city for viewing in Google Earth (also, see German version of the web announcement). Over 150,000 buildings are reported (German article) to be in the collection. That would make Dresden the city with the most number of 3D buildings available for Google Earth to date. The models were generated in collaboration with the companies virtualcitysystems GmbH from Chemnitz and 3D Geo GmbH from Potsdam. Unfortunately, they apparently were not prepared for the huge throngs of Google Earth users who would want to see the collection. I’ve been waiting several hours on this story to get access to see the models. But, no luck so far. The servers have apparently been overloaded. Here is the link to start the City of Dresden

3D building network link. Once it loads, double click on the Dresden3D folder – or enter “Dresden, Germany” in the “Fly To” window to fly to Dresden. Then, if their servers are working smoothly, you can zoom into different parts of the city and the models will load. In the meantime, there are some links to PDF screenshots of the new 3D Dresden on the German page here.
[UPDATE 10-July 0800 ET: Late last night I checked and got to see the new Dresden models. The collection is quite impressive. Some of the models are quite detailed with quality photo textures. Most others also have photo textures, and a few scattered ones do not – but, still give you a feeling of the dimensions of the city. Here is a video from Spiegel Online (thanks to GEB reader Mathias). Note: the video appears to have been done before they finished many buildings with textures.]
What I would like to know is where are those 3D building models that Hamburg claimed they were going to be releasing soon back at the beginning of the year?