[NOTE 22-August: this article is NOT about the new Google Earth 4.2 “Sky” feature which shows the view of the stars and galaxies of space. It is about a feature someone created for making clouds in the sky of Earth. Read this story about the new night sky feature of GE 4.2.] 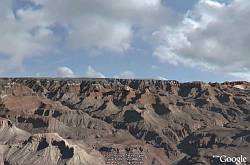 Yesterday we explored the nifty simple 3D model James published at his Barnabu blog for adding a sky with clouds over any spot in Google Earth to enhance realism. James had published a 3D model, which he calls a “skydome”, for use with the free Google SketchUp, which I then output to Google Earth. Now James has taken this to the next step, and made the skydome even more useful. He created a simple network link which will capture your current view and allow you to place the skydome model at that location. He also increased the scale so the dome is 50 miles in diameter so you can move around in the area and still have the sky around you. The screenshot shown here is of the Grand Canyon with clouds. (The new high-resolution terrain for the Grand Canyon is awesome).
Here are some tips on how to use the skydome network link:

I’ve already suggested to James the next logical extension for the skydome – a night sky. The trick will be to make the ground also look like night – possibly a dark transparent image overlay. And then you’d have to do custom 3D buildings with night colors as well. But, it should give James something else to innovate for Google Earth. Nice job on the skydome James!
Related: