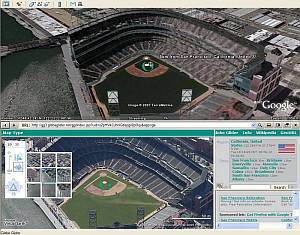 Before you rush off and try this, make sure you realize some things. To see the Virtual Earth view, look for the “Map Type” menu on the lower left of Globe Glider. To use it with Google Earth: select the “Globe Glider” menu and look for Google Earth (see this image). Once it loads in GE, you should have “Options->General->Use External Browser” turned OFF. Then select the “Open Globe Glider window” option which should now open Virtual Earth in the GE browser window. You can run it with another browser if you want, it just uses more screen real estate.
If Virtual Earth 3D doesn’t run on your platform (no Mac OS X or Linux, only works on XP SP2 or greater with .Net 2.0+), then obviously it won’t work with Globe Glider. I also recommend you have lots of memory and a beefy graphics card if you try to run Google Earth with 3D Buildings and VE 3D with 3D buildings at the same time. It worked for me, but I think I was really pushing my system even with 2 GBytes of memory. Also, there is a problem running Globe Glider with terrain turned on in GE at the moment. Bernhard suggests turning off the terrain layer in GE.
I’ll write more details after I create the video (see here). Bernhard promised me this exclusive since I suggested last year the idea of tying VE Bird’s Eye views to the same GE view. By the way, congratulation to Bernhard and the rest of the Globe Glider team. This is really cool stuff if you are geeky enough to be playing around with different virtual globe applications.