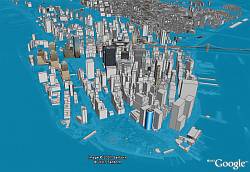 Back in early April I shared some fun stuff a GEC member called ‘Bzoltan’ did which shows the effects resulting if the seas rose from 1 to up to 100 meters. He takes advantage of Google Earth’s 3D terrain and ability to place 3D polygons at various altitudes above sea level. I say “fun” because 100 meters is a very unlikely thing to happen, but there is certainly a serious implication behind it. Bzoltan used a simple spherical approach, and Google Earth’s time animation feature, to allow you to get a dynamic rough approximation to what might happen. And, just for fun, he also did one allowing you to see what it would look like to fill up the Grand Canyon.
Meanwhile, Leszek Pawlowicz – who writes the useful Free Geography Tools (FreeGeographyTools.com) blog – wrote about some software tools available to do a more serious analysis of the effects of rising waters. Leszek used high resolution terrain data from the USGS, and some free software from a professor of the US Naval Academy, to generate some interesting animations illustrating more accurate methods for predicting the effects of rising water. I suggested he produce some visualizations for Google Earth, and yesterday he posted a KML file which shows the effects of water rising 8 meters on New York City

. If you play around with this file, or read his very informative blog post, you’ll see it is an image overlay with a shape which was cut from a high resolution terrain map of the area. Turn on the 3D Buildings to add more three dimensionality to the scene. Leszek plans to put together a time animation for Google Earth based on his more realistic approach to calculating water rising effects. In the meantime, you can see his movie showing rising waters for Manhattan using other tools: