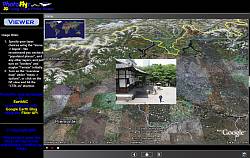 There have been a number of network links written for Google Earth for showing geo-tagged photos (tied to the place where they were taken). Over a year ago, the author of Geoblogger.com, Rev Dan Catt, did some neat Google Earth network links letting you see geo-tagged Flickr photos. The Flickr folks liked it so much, he ended up with a job there. A few months later, Flickr created Flickr Maps for viewing geo-tagged photos. Google Earth has it’s own built in photos now thanks to the Panoramio layer.
Recently, we saw the release of TwitterVision (for viewing the most recent Tweets on a Google Map), and more recently FlickrVision (for viewing the most recent Flickr photos on a Google Map). Both of these were written by David Troy. This more dynamic way of viewing recently posted content is mesmerizing and fun to watch in Google Maps. I wrote a blog entry about some ways you could view photos in Google Earth in a similar fashion.
Now I want to share another method for viewing the most recent photos with position information from Flickr by using Google Earth. Check out PhotoFlyr.com which was co-developed by EarthNC‘s Virgil Zetterlind, with a little help from Google Earth Blog (in other words: me). You can view it either in a browser window (using Google Earth thanks to a plug-in by Google Earth Airlines), or with a network link directly

(for those of you running on a Mac, Linux, or who just want the full application). See below for more details.

Background on PhotoFlyr:
So, last week, I had some discussions with Virgil about ways we could do something to show the most recent photos from places like Flickr. We came up with a Google Earth network link which can be viewed either straight from Google Earth, or using the GoogleEarthAirlines browser plug-in. Here are some interesting notes on the application:

We have other innovations in mind for the application. But, we thought we would release this since Google Earth is a fun way to view dynamic real-time content in 3D. Let us know what you think!