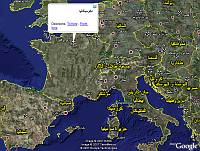 If you would like to see place names in other languages, Google allows you to switch to a few languages – but, only after you exit and restart the application (which also changes your menus, etc. to that language). Someone at the Google Earth Community has been working to make it possible to see place names for many languages by simply loading KML files. PriceCollins, who also manages the Google Earth Data Error Compendium, has been working on this project for the past several months. So far, he has over 1300 placemarks in 80 languages. Included are country names, capitals, and other large cities. See the details in his thread of posts about the project. Only a few of the languages are translated for all the placemarks so far, but he is taking requests and asking for volunteers to do more.
Here is the master list of place name languages grouped by alphabet or script type. (NOTE: once you load one of these, you will need to turn on the appropriate language you prefer in the folders which will load in your Temporary Places):

So, for many languages which are not yet supported by Google Earth, you can still see this valuable place name information in the language of your choice. Price has also created some very accurate global maritime boundaries data which is a companion to the placename project. The boundary data includes accurate placement of exclusive economic zones (which were described earlier here at GEB). Great work Price!