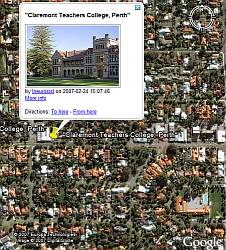 This morning I read a post by Brady Forest at O’Reilly Radar about David Troy’s new FlickrVision. This is a really cool mashup that lets you see the location on Google Maps of new pictures posted to Flickr as they are uploaded (at least the location of the user at least). It is mesmerizing to watch. David Troy was the guy who made the very cool Google Maps mashup called TwitterVision – which lets you follow Tweets from Twitter in real-time.
Here’s the fun part – Just yesterday, Stefan Geens posted about a cool application he found which uses Yahoo Pipes to pull geotagged photos from a Flickr user and output the results as a KML. Using this, and a nifty touring feature in Google Earth, you can get an even cooler effect for watching Flickr photos in Google Earth. Thanks to the power of the GE network link, I figured out you could run the whole thing from within Google Earth.
So, try this out:

Now, I’m sure someone can figure out a way to modify the Yahoo Pipe ‘Steeev’ did to automatically grab the most recent Flickr photos that are Geotagged. Then, we can easily watch the most recent photos using Google Earth just like FlickrVision! Anyone up to that challenge?
In the meantime, you could just modify the “nsid” parameter in the URL link of the Flickr Shower network link for a user who has geotagged photos, and view them right away. See the notes I put in the network link description.