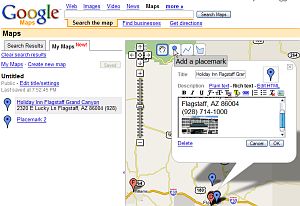 Google has just released a significant update to Google Maps which allows anyone to, in a sense, create their own maps “mashups” – or what they call “My Maps“. Google was kind enough to demo the new features to me on Wednesday. Look at Google Maps for a new tab on the left which lets you view and create “My Maps“. The user interface for creating content is point and click and uses many of the same approaches and functionality as seen in Google Earth. For example, you can create placemarks, paths, or shapes. For descriptions, you can even use a familiar rich text formatting mode to dress up your descriptions, or use HTML if you prefer. The end result of this new update is that Google Maps and Google Earth are coming closer together in many respects.
The really interesting aspect to the announcement is that the underlying data is all KML! KML is the file format for Google Earth content – and now Maps too. This means you can create your maps and then click on the “KML” in the upper right of the map and immediately view the content in Google Earth. Furthermore, when you search for content you will not only be able to get local business search results, but also get KML search results (just like the recent KML search update for Google Earth). Look for a “See user-created content” link after the other results – it only appears when there is relevant content searched in the current view (see example).

When you first load Google Maps and go to the “My Maps” tab, you will be presented with some example public maps called “Featured content” (sound familiar GE users?). These examples were actually the result of a contest held internally at Google. The prize for the contest was a Nintendo WII, and apparently the results of the competition was much bigger than expected. Here’s a direct link to the first featured map (documenting a trip along Route 66). And, here’s a link to the same thing in Google Earth

(you could get to this by clicking the KML link in Google Maps while viewing the previous link).
To create your own map, just click on the link under the “My Maps” tab which says “Create new map“. You will see four little icons just to the right of the zoom/pan controls on the upper left of the map (see the screenshot above). These icons should look somewhat familiar to regular Google Earth users. They allow you to “Add a placemark“, “Draw a line“, or “Draw a shape“. This is all point and click, and works pretty intuitively. When you create a placemark and mark it on the map, you get a little bubble which lets you add a title, and a description. Again, very similar to GE. Just above the description, you can click on “Rich text” to get an interface to add “bold“, “italics“, etc. GE doesn’t have that capability – yet. Once you are done, you can save your map. You also have the option to choose whether your map is “Public” or “Unlisted“. If you choose “Unlisted‘ it won’t be searchable. If you choose “Public” your map won’t be searchable for a few weeks until Google next updates its search indices (just like with the Google Earth Community layer).
[UPDATE: Here’s a video by CNET which shows how to use My Maps to create a map.]
Here’s a few initial thoughts about the impact of the new “My Maps“:

We live in interesting times for the continued rapid advancement of geospatial content – aka maps. Thanks Google!