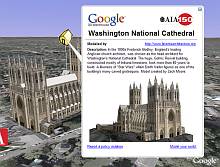 Google released some new layers yesterday. Under the Featured Content layer you will find two “American Institute of Architects” sub-layers. Google spent weeks developing 3D models of the top examples of architecture in America for viewing in Google Earth. Here’s information from a press release:

The Blueprint for America layer documents community service efforts funded by the AIA, where AIA members donating their time and expertise to collaborate with community leaders and local citizens to address issues such as homelessness, sustainable communities, and downtown revitalization. America’s Favorite Architecture layer features the American public’s favorites as selected by a poll announced earlier this year. Google Earth viewers can see many just created 3-D models of the ballparks, bridges, buildings and memorials that characterize architecture for Americans as well as comment about the poll results.

In a post here at GEB last week, I had noticed there were number of excellent new models posted by Google to the 3D Warehouse during the past few weeks. Now we know why these models were being done! To view the models, turn on the new American Institute of Architects Layer and fly to the placemarks shown (Google Earth 4 required). Zoom down close enough to see the buildings (or double click the placemarks). You will see the buildings automatically load. I recommend turning off GE’s normal 3D Buildings layer if you experience performance problems in big cities. There are some excellent building models in the collection, and I will highlight some later in a video.
Google also released a YouTube video talking about the new AIA 150 release: