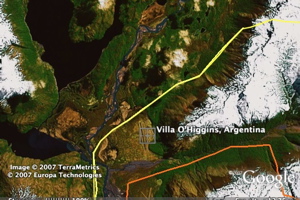 Since the news media seems to think this Google Earth border data error is a big deal, I thought I would try to find out where the border is supposed to be. The point of contention is that a town in Chile called “Villa O’Higgins” is shown in Google Earth to be in Argentina. The border in Google Earth is clearly wrong, and the search results also show “Villa O’Higgins, Chile” to be in Argentina. I looked around for a detailed enough map to show the border in this area. Ultimately, I ended up trying Virtual Earth from Microsoft. The roads and cities information are almost non-existent in this area, but the border detail is pretty good in Virtual Earth (or Live Maps – or whatever they are calling it these days). I then created a Google Earth map

showing the current border (in yellow) in Google Earth, and then I estimated the correct border position (in orange) based on the VE map (as well as other maps I found). Here is the same map in Google Maps.
The data source Google is using for the border in Chile is apparently pretty low resolution. I suspect they just need to acquire border data with higher resolution (and better accuracy) and this problem (and probably others for the area) will be greatly reduced. The thing everyone should realize is that Google isn’t intended for survey-level accuracy on things like this. But, I guess with the huge popularity of Google Earth, you have to expect people are going to hold it to a higher standard.