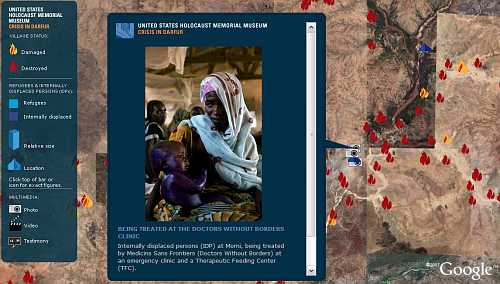 The new Crisis in Darfur layer, which was pushed out into Google Earth on Monday night (as first reported here), was formally announced on Tuesday in Washington, DC by the US Holocaust Memorial Museum and Google. Google has featured this layer as a new default layer (turned on when you first bring up Google Earth). The news of the new layer was picked up by major media sources all around the world (see a media summary – with links – of major news stories at OgleEarth). Over the coming days and weeks, the millions of people who have Google Earth installed will start up the application and discover the new layer. Even more attention and learning about this tragedy will occur.

A version of this layer was first released back in February. Since February, an enormous amount of effort from people all over the world – who specialize in GIS and Google Earth content – was put forth to greatly enhance the Crisis in Darfur layer before it was released this week (see the credits at the end of this page). When the layer was released in February, it did not get much media attention. Although its truly a much better layer now than in February, it isn’t the quality of the layer which has captured the attention. It’s the fact Google got behind the layer, made it a layer turned on by default in GE – and joined USHMM in their press announcement. Now, it suddenly it gets major attention. In my opinion, if you have super-power brand name recognition, and an innovative application of information dissemination (Google Earth), then helping elevate attention to a crisis like the one in Darfur is a very good thing. My congratulations go to the team of people and organizations who helped create the Crisis in Darfur layer. But, my hat is off to Google for using their marketing power for good.